Once Varni was advancing all alone towards Badrinath. He was bare-footed and no woollen clothes on his body. He was stopped by men from advancing towards a way which would lead him in the jaws of death. “So cancel your idea of going there”. “Death! where's death? I can see death nowhere,” replied Varni. “But don't you see this snow and snow covered peaks of mountains? They will devour you straightway,” said the man. Varni smiled and said, “The snow covered mountains are saints. They will welcome me with fruits and flowers. I can see the snow covered mountains as the incarnation of God, it is delighted with me and I am delighted with it.”

The men did not understand anything, they said “Varni, still you are a child, you don't know death yet. Varni smiled meaningfully and said, “Kalikal or for that matter no Kal I know not is not the thing In all Kalas [TIME] the basic thing is a right duty, I have witnessed sins and Adharm everywhere in the world. I became displeased and left the home. I want to re-establish Sad-Dharma, for this even Kaliyuga is at my service. I want to show the world that Kaliyuga inspires us for Bhakti and it nourishes Bhakti”. Now all of them recognised Nilkantha Varni. They explained, “Oh, how powerful Varni Maharij is! Well-done to his parents.”

God has nothing to study. Whatever God does during His incarnation of man is merely to provide an example. 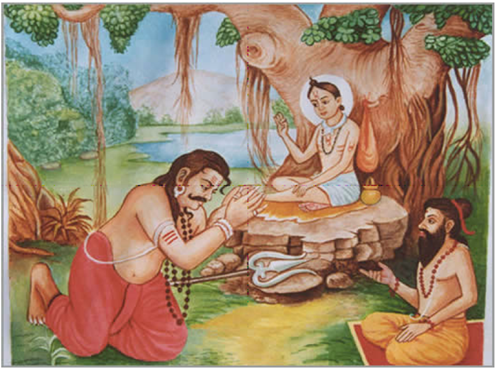