A devotee means a devotee. Devotees have no castes or colour. He might have been born in any family, he might be in any job, but a devotee is a devotee. Sagaram Vaghari was such a devotee. He was a poor man. He had to go many a time without food. Once he had the Darshan of Shriji Maharaj. He heard Maharaj's Speech. As a result, he fell at Maharaj's feet.

Sagaram took a deep breath and uttered the name “Swaminarayan ..... Swaminarayan”. Thus repeating he fell into meditation. Maharaj was pleased and said, “He is mine”. Sagaram whom Maharaj regarded “mine” was now totally changed. He was a strict disciplinarian. If he would touch a lady's dress, he would go undergo a day's fast.

Sagaram Bhakta lived in a small village named Libly under a roof. Once Shriji Maharaj came to Libly with a group of saints and followers. At midnight, Maharaj left the saints and followers fast asleep and reached at the door of Sagram Bhakta. On seeing Maharaj at his door, Sagaram was mad with joy. He was so much over joyed that he failed what to do and what not to do. He had no suitable place for Maharaj to sit on. Maharaj sat on a sack (a gunny bag). Maharaj said, “Sagaram, I am hungry”. Sagaram was put into confusion. Then Maharaj himself drew near him the loaf and a cup of curd preserved in a corner. He passed that whole night in Sagaram's thatched house. Here Maharaj had no cot nor bed. He stretched himself on the same gunny bag on which he sat.

“Who is that man? What is his caste and colour ?” The meaning lies in the questions themselves. It means:- He is a devotee and that his caste and colour. All devotees have one caste. There are same none is high or low. None is rich or poor. None is Brahmin or untouchable. On seeing Maharaj's love for his devotees, the Swami's eyes were full of tears of joy.

Shriji Maharaj's teaching to Sagaram are also meant for us. Maharaj wishes that every Satsangi must have these many virtues. (Refer to the Commandments of SHIKSHAPATRI - Nos. 11,13,15,20, and 21) The disciples shall never kill or harm deliberately any living beings in this world though they are negligible tiny insects such as lice and bugs and none shall ever use violence against any person. Flesh in any form shall not be eaten even though it is a remnant of offering in a sacrifice, and liquor or alcohol shall not be taken though it is offered to a deity. None shall use abusive and indiscreet words. None shall libel others nor hear such bitter remarks for others. 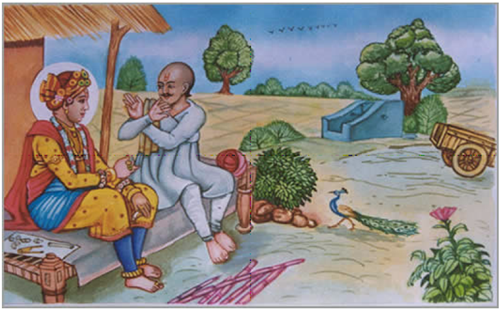