Nilkantha Varni had started for pilgrimages in India. Once he was in South India. He met a sadhu. This sadhu had studied the scriptures and religious books very well. When he lectured upon the Bhagwat, people showered upon him heaps of rupees. He tied these rupees to his waist and moved here and there. He had at least a thousand gold coins with him. It so happened that he fell sick on his way. He was suffering from diarrhoea. He could neither walk nor stand. Putting his hand on his head, he began to weep, “Oh, now what will happen to me? Who will serve me now?” Nilkantha Varni said, “Don't worry, I will serve/treat you.”

There was, on the outskirt, a farm of plantain (banana) trees. There was a Banyan tree in the farm. Nilkantha Varni, brought some banana leaves, spread a thick layer under the banyan tree and thus made a bed and laid Sevakram on it. Sevakram was totally exhausted. Nilkantha Varni cleaned him whenever he had urine or motion. He brought medicine for Sevakram and gave it to him.

The Sadhu Sevakram gradually recovered. Now he felt hungry. He had money too. He said to Nilkantha Varni, “Take this money, go to the market, bring sugar, ghee and flour, and prepare something for me to eat.” Saying this he gave money to Varni. But how much? Only for one man's food, not a single paise more! Varni brought the necessary ingredients. He prepared food.

The sadhu sat for lunch. He ate away all the food. He did not even say to Varni, “O Varni, you have served me, cooked my food, and you also sit with me to eat.” After the lunch, the sadhu rested. But Varni was hungry. He went to the village, begged some food for himself, and thus passed that day. But alas! This continued. Everyday Varni went to the market, brought necessary items and prepared food for the sadhu, while he himself would beg and eat, and pass his day. Sometime he would get nothing and he would have to fast. The sadhu knew this but he would never say, “I have money with me, take some more and bring sufficient for both of us.”

Two months passed thus. The sadhu was completely recovered. Now he could digest one seer/kilo ghee! So powerful he had become! He told Varni, “Now let us go to Setubandha Rameshwar.” Saying thus, he gave his big bundle to Varni to carry it. The bundle weighed exactly twenty kilograms. So heavy it was! The man with a capacity to digest a kilogram ghee, would walk freely with only a rosary in his hand, while a skeleton like Varni was following him carrying the sadhu's heavy bundle! Varni never had his own luggage. Not even a small kerchief!

This is the story told by Shriji Maharaj himself. He says, “My nature was such as would not allow me to have a burden even of a kerchief.” “But knowing that

Sevakram was a sadhu, I carried his heavy burden of a maund.” “I treated and served him as such, but that sadhu did not offer us a corn worth even a paisa.” “So considering him a man of ingratitude, I left him.” Thus learn a lesson that a man who forgets the good done to him is a man of ingratitude.”

The commandment of the Shikshapatri (26)

One shall not associate himself with ungrateful person.

This is a fine lesson. It is based upon the third chapter of Gadhada in Vachnamrit. Shriji Maharaj has given to the followers and saints a very practical lesson. He has clearly mentioned what to be along with what not to be. His followers/bhakt might be kind, serviceable, believes in the motto `service before self' - all this is all right; but Maharaj disallows a person who is a simpleton and is continuously cheated by the wicked. So Maharaj in the Shikshapatri commands not to associate himself with such an ungrateful person.

Sadhu's name is Sevakram. It is very interesting. Truly speaking, a person who serves others should be named `Sevakram'. But here we are introduced a person who shamelessly/impudently seeks the service of others, and calls himself Sevakram. This illustration teaches us never to be deceived by the name or outward appearance. 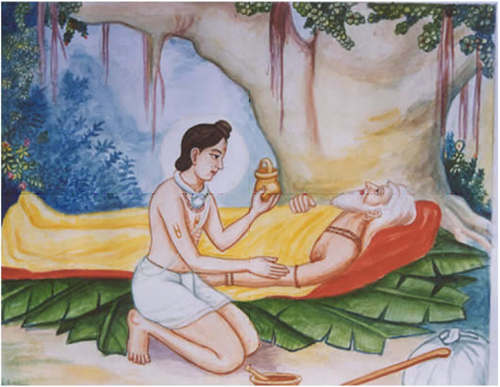