Meeting Of Varni With Ramananda Swami

Muktananda Swami was astonished at Varni's achievement of yoga. He had never seen such a yogi before. He had determined never to let Varni go from Ashram. He wrote to Ramananda Swami to come soon, otherwise the young Sanyasi would go away and such a yogi is era to be seen. Varni also wrote along with this letter, “I am waiting for you as farmers await for the rain.” Ramananda Swami received these letters. His joy knew no bound. “The Master of Satsang for whom I was awaiting has come at last,” said Ramananda Swami, “Who am I in comparision with him? I have been telling all the time that I am merely a harbunger [announcer of the coming of Great Master]. The real player is yet to come. Now he has come.” Thus was the first announcement of the coming of SHRIJI MAHARAJ in Bhuj. All devotees heard this with astonishment Ramananda Swami wrote a reply. “If you at all wish for Satsang, cling strongly to the pillar” His meaning was that Varni should remain within the jurisdiction of Muktananda, the pillar of Satsanga.

At once Varni jumped and clung to the pillar. Then Mayaram Bhtt said,” Be within the jurisdiction of Muktananda Swami.” SHRIJ MAHARAJ himself has said in the chapter no. 3 of LOYA in VACHANAMRIT,” I was well within the jurisdiction of Swami Muktananda before I had the Darshan of Ramananda Swami.” Thus he showed again that the person who is interested in the welfare of his soul, will never go away from the words of his Master [GURU] and will obey his Master. After sometime Ramananda Swami arrived in Saurashtra from Kutch. Neelkanth Varni had his first Darshan in Piplana in Saurashtra. He had visited all most all the places of pilgrimage in India except Dwarika, but now he said, “I do not want to wander now leaving the favour of your shelter. I will ever be at your feet. Here lies all my pilgrimage.”

Whoever has such a steadfast faith shall be entitled to get the favour of the Master. Then in the Vikram era 1857, on the eleventh day of the first half of the month of KARTIK, Ramananda Swami ceremoniously initiated him [DIKSHA], and gave him true new names of SAHAJANANDA SWAMI and NARAYAN MUNI. Thus a small village of Piplala became fortunate. Newly initiated Neelkanth Varni joined his hands and stood before his Master. The Master [GURU] placed his hands on his head and blessed him. Now Sahajananda Swami began roaming with his master. He observed penance Vrata and made his body so weak that his body would not perspire and he would not feel heat or cold. Ramananda Swami wrapped him in the bandages mixed with CASSIA AURICULATA (Aawal) so as to perspire him, yet he did not perspire Shriji Maharaj himself has told this story in GHADHADA - Chapter 70. Maharaja's aversion to worldly pleasures was joined with knowledge, like fabulous marine fire.

Other fires well be extinguished if water falls on them, whereas marine-fire is a fire which, even though related to sea water, is never extinguished by water, such was Maharaja's VAIRAGYA [avession to worldly pleasures]! Like fabulous fire on the sea ! All mixed with knowledge! who ever saw this VAIRAGYA was sure that he was not an ordinary man. A year passed on, there after Ramananda Swami once held a meeting of saints and devotees and said, “Now the time has come for me to renounce this body. Tell me the name of a person to be in charge of my office.” Muktanandaji was the oldest of all saints. And he was entitled to take charge of the office but he himself told first of all, “Sahajananda Swami is the best of us all. Entrust him the responsibility and burden of Satsangha.” All supported him, but Sahajananda Swami said, “I like forest more than populated places. I wish only to live in the forest..” Then Ramananda Swami persuaded him and said at last ordered him, “You shall have to bear the yoke [burden] of religion.” “As you wish,” said Sahajananda Swami and obeyed his command. On the eleventh day of the first half of the month of Kartik of Vikram Era1858, Sahajananda Swami was ceremoniously seated on the throne of Satanga in Jetpur. Thousands of devotees participated in this function. 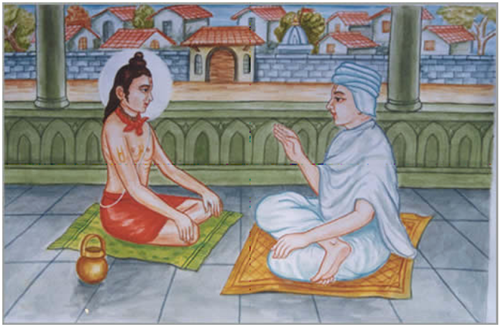