There is a small village Jetalpur near Ahmedabad. There lived an-old woman. Her name was Gangabai. She had great affection for Shriji Maharaj. She was overjoyed when Shriji Maharaj came to Jetalpur. She would take Shriji Maharaj to her home and would give him food to eat. Shriji Maharaj would also gladly go with her affectionately and call her “Mother”, “Mother.”

She would put a basket on her head. She would put a burning fire-pan (stove) on the basket. And on the stove she would place utensils full of pulse (dal) and vegetables. As soon as it is time for lunch, she would prepare and serve hot and fresh food to Shriji Maharaj. Within minutes the dish would be ready. None but a mother would do such a service. So Shriji Maharaj calls Gangama `Mother.' Shriji Maharaj's mother is also our mother. Even today in Jetalpur there is a small room where Gangama lived and there is an idol of Radha-Krishna which she worshiped. 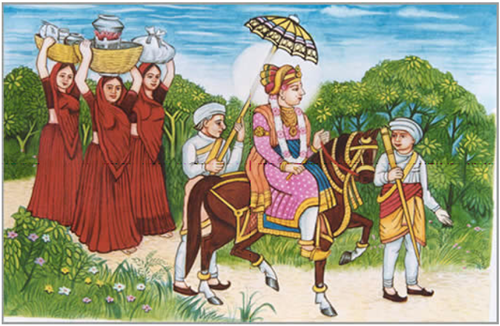