Once Maharaj was roaming alone in some village of Kutch. He came to a farm in Rampur village. This farm belonged to three `kanbi' brothers. They were drawing water out of well by help of bullocks, at the time when Maharaj appeared there. Maharaj came to the basin of well. All the three brothers looked at him. Maharaj had a gourd in his hand, a deerskin on a shoulder, and dishevelled hair on his head! It appeared as if a teenager had turned a sanyasi! “I am hungry, please give me a loaf,” requested Maharaj. “We have already taken our meal just now, nothing is left now,” said the brothers. “Please give me something from your evening food that you have reserved,” said Maharaj.

All the three were surprised at the sadhu's knowledge of the evening food that they had preserved. Still the two elder brothers did not say anything. But the youngest of them all, Laxman, took out his loaf and offered to Maharaj, saying, “O sadhu, I have only this half a loaf.” Maharaj said, “Oh very fine!” He ate that half a loaf enthusiastically. During this time all the three brothers were busy with watering their field. All of a sudden their eyes fell on Maharaj and saw that Maharaja's locks of hair were shining like gold. On seeing this, the elder brothers said to the youngest, Laxman, “Laxman, the bawa that you gave a loaf appears to be a magician, sorcerer or conjurer.” Their work of drawing water from the well went on.

Again the three brothers saw that the sadhu was seated at the top of a branch of a tamarind tree. The elder brothers told the youngest one, “The bawa was sitting on the ground just now, and within a wink of an eye, how has he climbed up the top of the tree?” “A very big magician!” Thus to the two elder brothers, Maharaj seemed only a magician, but the youngest brother's mind was leaning towards Maharaj. In the mean time, Maharaj said to Laxman, “Say, what do you want.” Laxman replied, “Lord Shiva of Bileshwar provides me with loaf, a house, occupation, and whatever I want.” “What else do I want?”

Maharaj was pleased with Laxman's answer and spoke, “Your family is the family of my devotees! Bravo!” Saying this Maharaj went away. After twenty years when Maharaj had visited some villages, he again came to the same field. This time Maharaj advised Laxman to reap `Jawar' [CHASATIO - a variety of jawar] immediately. “Laxman said, “The harvest of other farmers is still there, it has not been reaped yet.” “It is going to rain heavily.” “If you don't cut it now, it will decay in water.” Laxman reaped it and preserved it. There was a heavy rain. Scarcely do we see such a rain in Kutch. Only Laxman's jawar was saved in this heavy rain. Laxman was enlightened and spoke, “Half a loaf very well bore fruits!”

Note down the difference between Laxman and his elder brothers:-The elder brothers have no faith in saints, while Laxman has. He goes without supper and feeds the sadhu. He is contended also. And so even when asked by Maharaj, he doesn't ask anything. Without asking, Maharaj gives him a boon, “Your family is the family of saints”, means that saints [Akshar Mukta's] will be born in your family.

Service rendered to saints will sooner or later bear fruits. But never serve the saints in hope of such fruits. Laxman's service bore fruits because he served Maharaj without its fruits.

Maharaj gives darshan to three brothers in the form of Nilkantha. 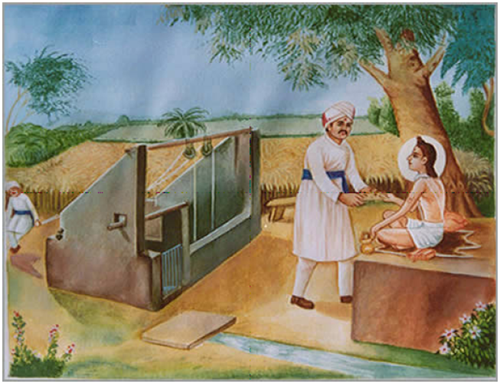