A Man About To Commit Suicide Was Saved

There lived a certain man in a certain village He was very unhappy financially. He hardly got a meal, he prayed to Gods and Goddesses. But no change in his wretched condition could be visible, he decided to die, and for the purpose he went to the unused well very far from his village. He was about to plunge into the well when he heard the voice , “Stop”. He was a little bit stunned, he saw that a young ascetic had arrived at the scene to save him. He was Nilkantha Varni. On seeing the radiant face of Varni, the man fell at Varni's feet.

Varni said “Why were you bent upon committing suicide ?” “I was going to commit suicide, because Wealth and food are necessary for living. God did not give me these two things, taking it for granted that God does not want me to live. I was prepared to commit suicide,” answered the man. “O, my brother,” said Varni, “God wants you to live and therefore he has stopped you from death,” That man said, “Where is God ? “ Varni said, “God is just before you.”

Glimpse of God. He fell at the feet of Varni. “Don't be disappointed,” said Varni, “Life is for living, not for dying. God is the master of life and death. Therefore, always surrender yourself to the evil of God. Never think of committing suicide The man who kills others is a great sinner. But a person who commits suicide is a greater sinner so never commit such a sin.” “I will never commit such a sin, “ said that man and he went home quietly. Varni them proceeded ahead. 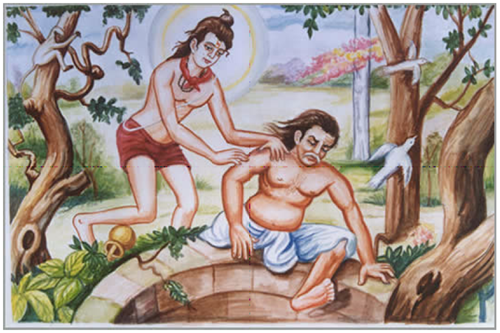