Mansi Pooja or mental worship is a kind of worship in which the devotee serves Maharaj as if Maharaj is standing before the devotee to receive all His oblations. This mode of worship is the best spiritual means that increase our love for Maharaj. Mansi Pooja is offered five times a day.

Mãnsi pujã is a form of dhyãn (meditation); but, it is much easier than focusing on the murti of Bhagvãn. This is because the mind is actively serving Bhagvãn by performing various duties, which means the tendency to lose patience is reduced. Also, the mãnsi pujã only lasts a few minutes, and can be performed from anywhere. The greatest benefit from performing mãnsi pujã is the fact that over time, it allows us to develop a bond with Bhagvãn.

Whilst most devotional activities are performed externally and physically, mãnsi pujã helps us to realise ourselves as separate from the material body; instead we are  divine souls in the divine sevã of Swãminãrãyan Bhagvãn. Temporarily we are in this human body living in the material world. However, through mãnsi pujã, we become an mukta and serve Swãminãrãyan Bhagvãn in Akshardhãm.

The mãnsi pujãs are ideally performed five times a day:

An immediate concern for many is "How can we possibly find the time, or remember to do mãnsi pujã five times a day?!" The simplest answer is we must try. We can set reminders on clocks, email, or our mobile phone. We should make it a part of our routine; the second mãnsi pujã should be performed before we eat our lunch, the third mãnsi pujã can be performed on the way home from work, the fourth mãnsi puja should be performed before we eat our dinner, and the fifth mãnsi pujã before we go to sleep. In these modern days, it is difficult to keep a routine with fixed times. Therefore, the mãnsi pujãs may not follow the times of our activities, although one should try and have fix time on a daily basis.

Mãnsi pujã is the only way we can become closer to Bhagvãn and form a bond with Him. In Vachanãmrut Sãrangpur 3, Shreeji Mahãrãj has said “If a person lovingly performs pujã of Bhagvãn, with hair-raising sentiments and an emotion-filled voice, then regardless of whether he performs physical pujã or mãnsi pujã, both are superior. On the other hand, if he performs pujã mechanically – without feeling love or excitement, and without showing emotion in his voice – then regardless of whether he performs physical pujã of Bhagvãn or mãnsi pujã of Bhagvãn, both are inferior.” Therefore, if our mãnsi pujã is performed with love and affection, Mahãrãj will accept our sevã as if we are serving Him in Akshardhãm. Further notes can be found in Vachanãmrut G.A 23.

What if a mãnsi pujã is missed? One is allowed to make for the previous one whilst performing the next one. Although we mustn’t make this a habit!

The first Mansi Pooja is performed early in the morning. Imagine you are requesting Maharaj to wake up. Maharaj wakes up and sits leaning on a pillow. Then Maharaj gets up and goes to the bathroom, offer Maharaj a datan (Brush). Offer Him scented water to wash His mouth. After Maharaj has bath using scents and fragrant powers, offer Him rich clothes and ornaments suited for the four seasons, warm clothes in winter light clothes in summer. Offer Maharaj garlands and bracelets and armlets. Apply a tilak and chandlo on His forehead and offer Him Milk with sugar, saffron and grinned pistachio and rich delicacies for breakfast. Once Maharaj has had breakfast, offer Him water and mukhvas 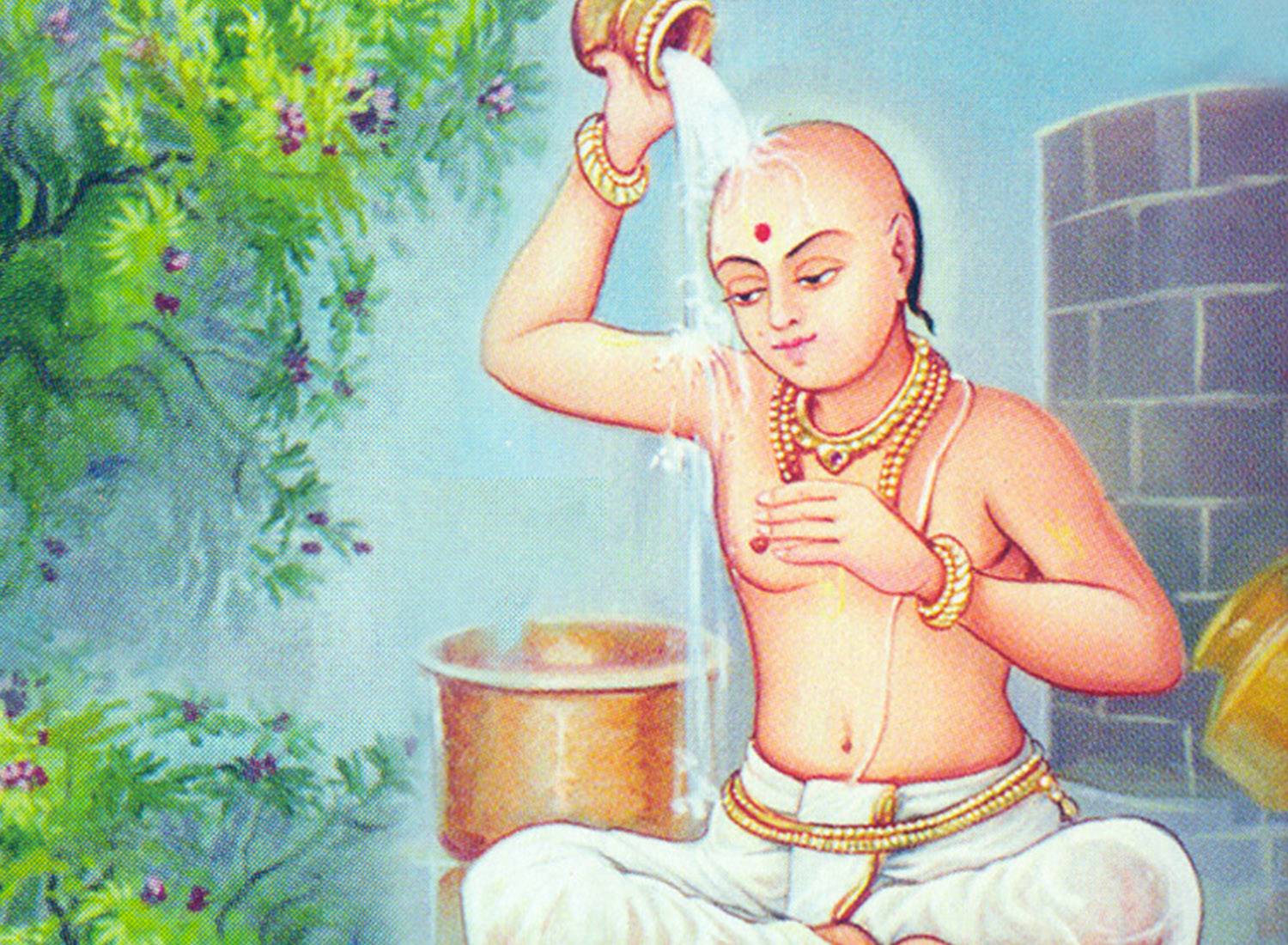 The second Mansi Pooja is performed late morning-early afternoon. Maharaj in royal robes, garlands and ornaments is seated on the divine throne. As lunch time approaches ask Maharaj to sit on a decorated bench and serve Him richest food, boiled, baked, fried and sweet dishes. Bare in mind that all the Devotees are watching Maharaj eating the food you are offering. After Lunch offer Maharaj water and mukhvas, Maharaj retires to bed.

The third Mansi Pooja is performed at around 4 o’clock in the afternoon. Wake Maharaj up and imagine that you are offering Him water to clean His face and gargling in His mouth. He drinks some of the water and accepts fruits available as per the season and offer prasadi to all the muktas. Imagine Maharaj going for a walk in a garden or going for a bath in a river depending on the season, accompanied by Devotees. Offer Maharaj flowers and experience His divine bliss. 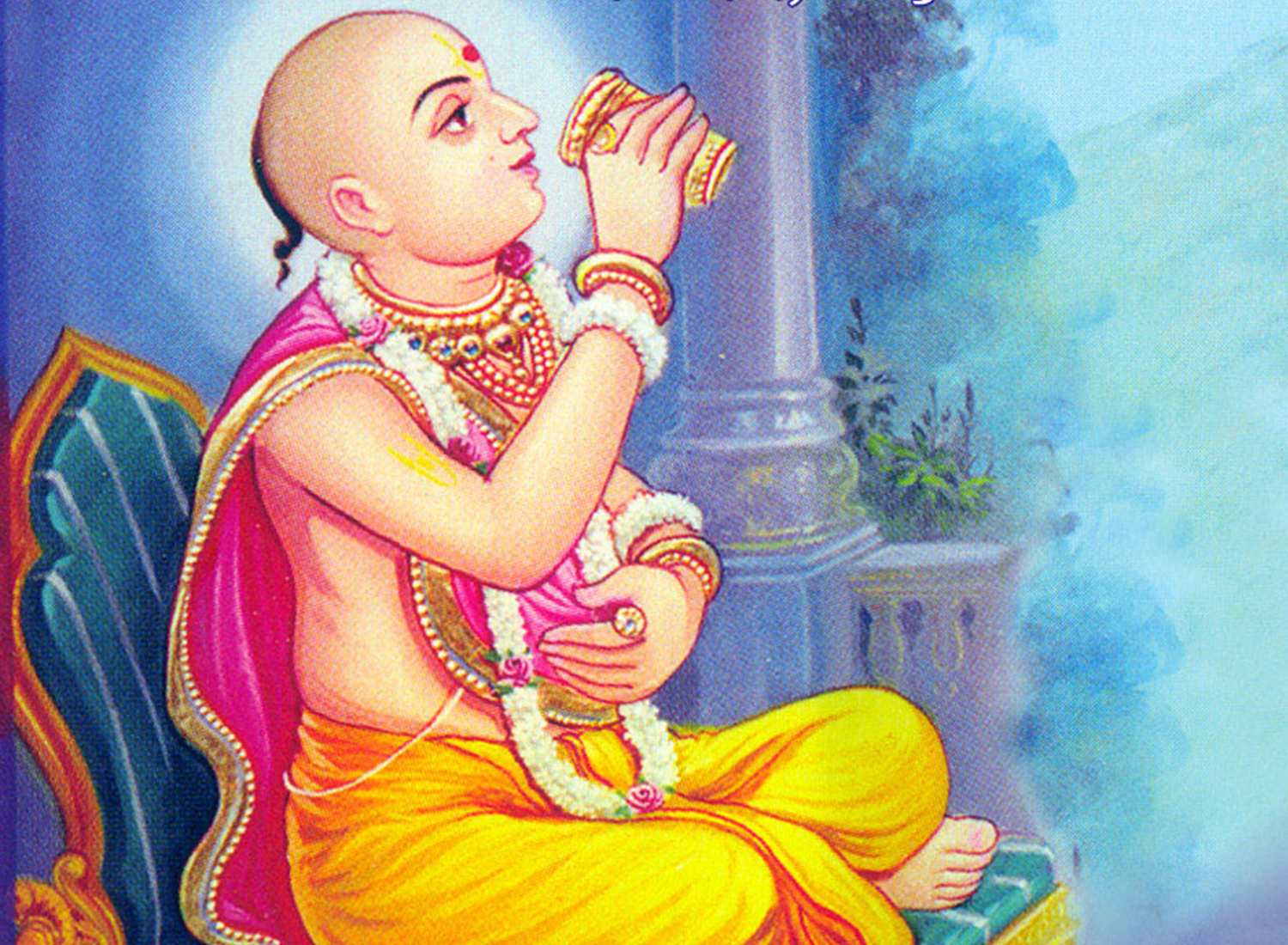 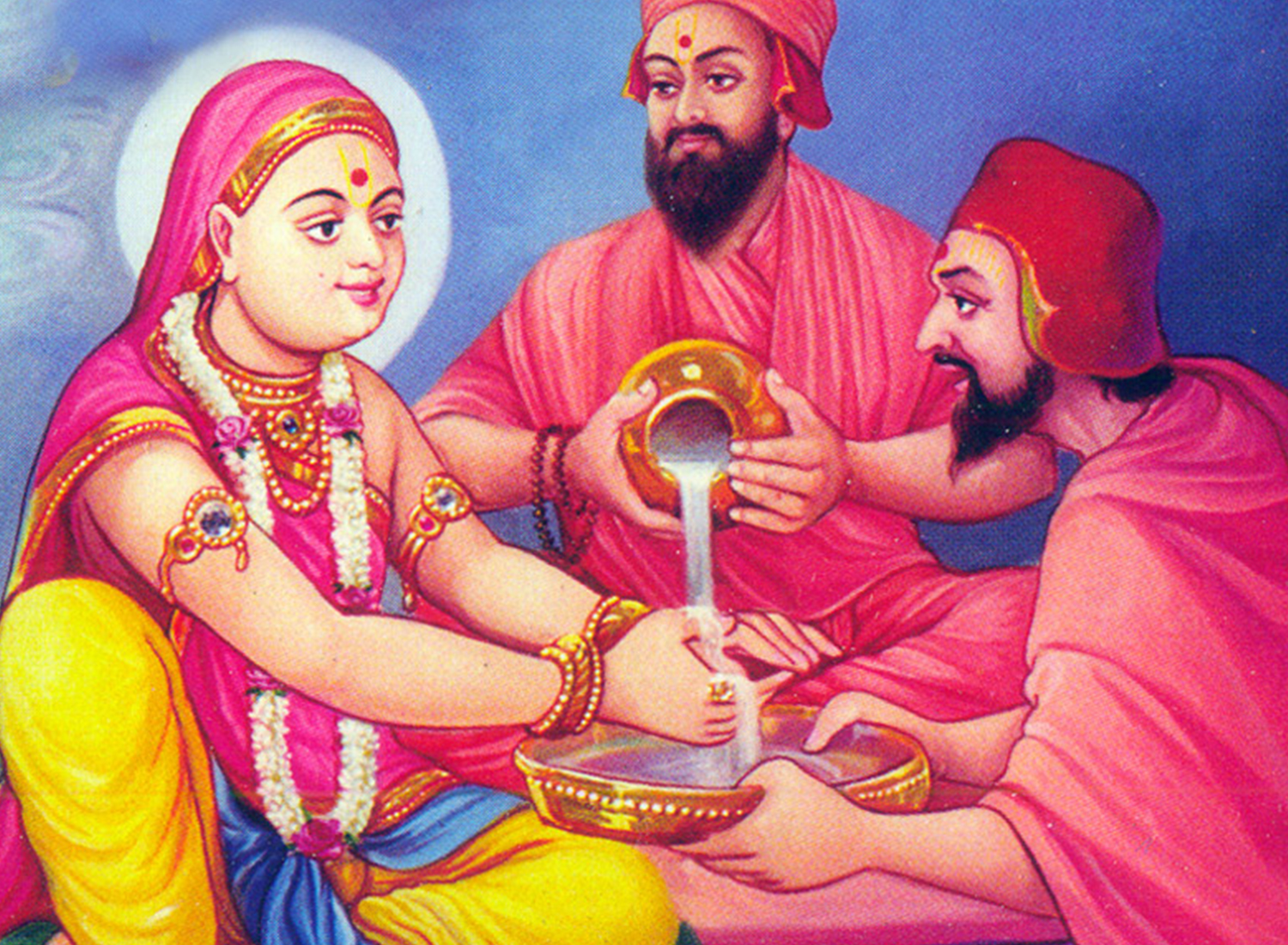 The fourth Mansi Pooja should be performed at or around dinner time. Maharaj is seated on the divine throne is all splendour with devotees seated in front of Him. Imagine you are performing Aarti pooja and the devotees are rejoicing in the divine glory. Imagine Maharaj at the end of the Aarti is blessing all the devotees. Maharaj sits on a bench and eats supper. Imagine Maharaj is eating Khichdi, Kadhi, Bhakhari, vegetables and drinking milk. After eating supper Maharaj drinks water and accepts mukhvas.

The fifth and last Mansi Pooja is performed just before you sleep. After accepting fresh milk, almond-puri and laddu, Maharaj drinks water and retires to bed. You should imagine that Maharaj is sleeping, eternally dwelling in Akshardham and you are completely immersed in His murti. All the five Mansi Poojas should be performed regularly with devotion and glory of Maharaj in our heart. It should not become a burden. In order to attain oneness with the murti of Maharaj, one must surrender his body and mind to Maharaj. 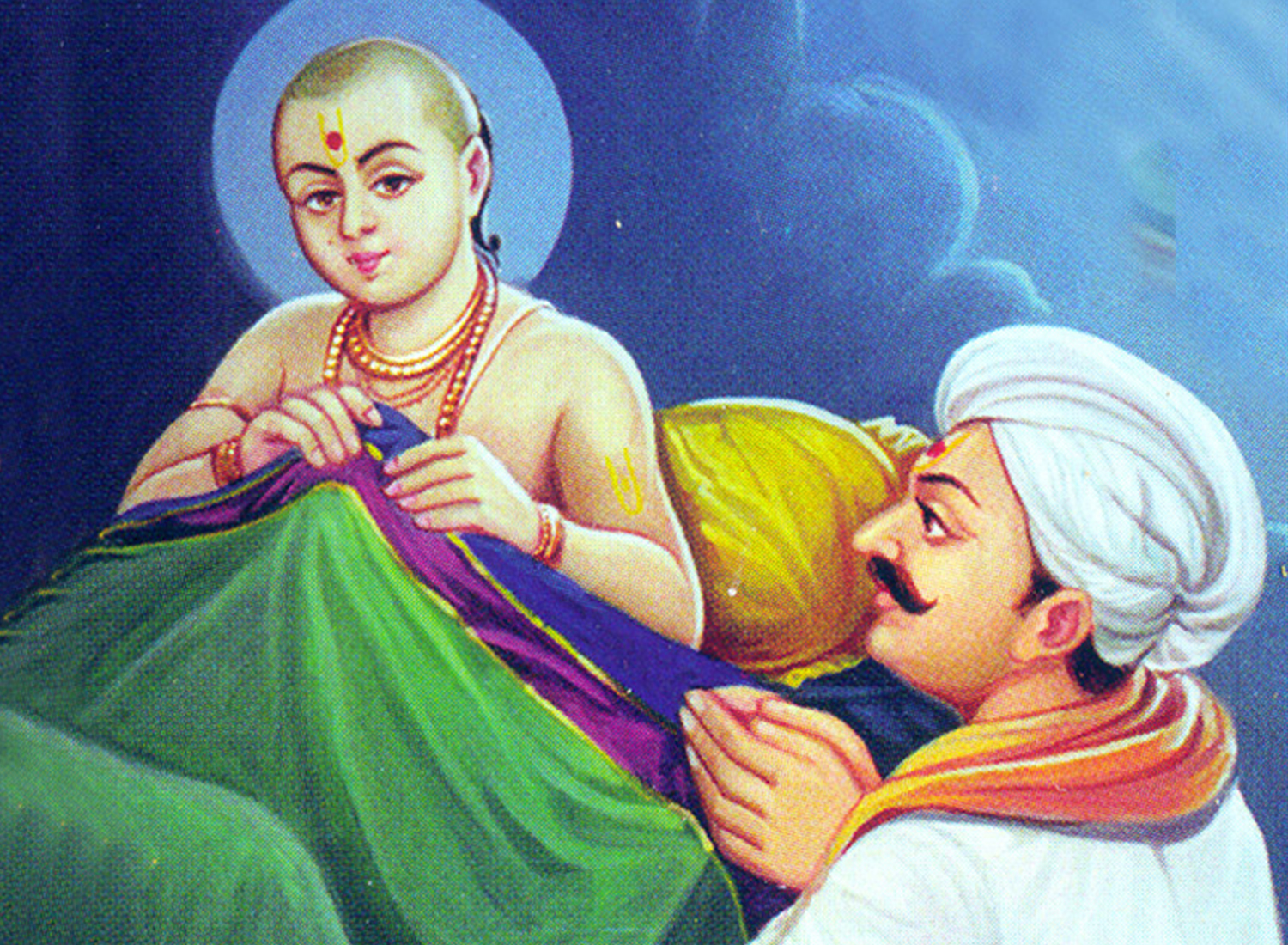